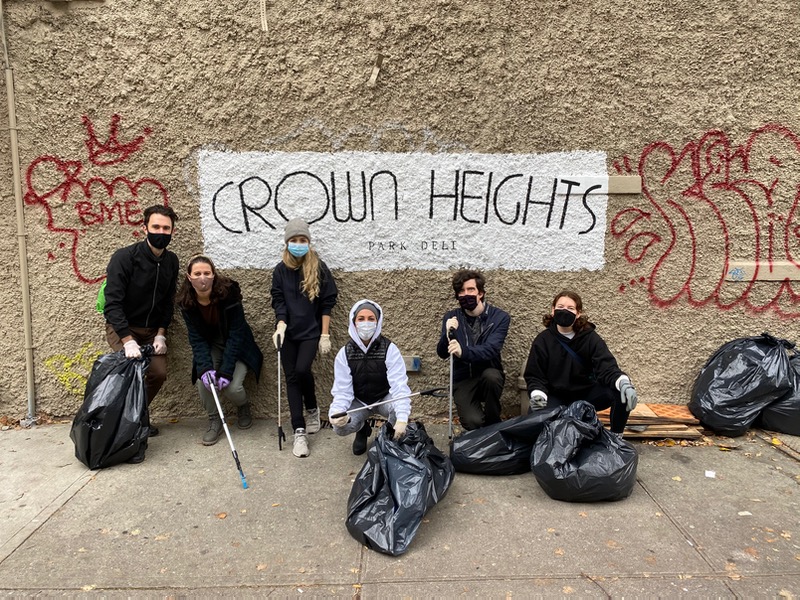 I noticed how many other neighborhoods had litter crews, so I realized it was a city problem. It wasn’t until I saw another cleanup group in Williamsburg that was really successful that I was like, ‘Whoa, we can do this!’

Organizer of Clean Up Crown Heights

She posted on NextDoor and created an Instagram account. Soon, she was joined by a dedicated group of volunteers who hit the streets weekly starting last summer. They became Clean Up Crown Heights.

“I noticed how many other neighborhoods had litter crews, so I realized it was a city problem,” said Yitzhaki. “It wasn’t until I saw another cleanup group in Williamsburg that was really successful that I was like, ‘Whoa, we can do this!’”

With stay-at-home orders in effect, the city Department of Sanitation collected heftier loads of trash from households while New Yorkers filled the gaps left by budget cuts. The city had put its curbside composting program on hiatus and reduced litter basket collection.

Increase in tons of trash collected from households by DSNY in 2020 vs. in 2019.

The pandemic created the perfect storm of litter. People working from home were producing more trash that needed to be picked up by a workforce whose budget had just been cut by $106 million. Volunteer cleanup groups that formed in neighborhoods across the city helped pick up the slack.

On a crisp Sunday morning this winter, fewer than 15 people assembled outside Savvy Bistro on Nostrand Avenue awaiting garbage bags and trash grabbers. The group was a mix of “a core group of volunteers and new faces,” according to Roxana Bartolome, a Clean Up Crown Heights organizer.

After almost two hours of scouring and scooping, the bags were heavy with the weight of a clean conscience. The routine has occurred every weekend, weather permitting, since the summer. Other volunteers have also stepped up to handle waste.

Brian Thompson took a week off from running the composting drop-off site at Prospect Heights Garden in August. After the pandemic-induced shutdown closed the farmer’s market at Grand Army Plaza, the garden’s neighbors were left with nowhere to compost.

“I was really bummed,” Thompson said. “I had the garden to go to as a member, but no one else did. It wasn’t fair.”

On a recent Sunday, people queued outside the garden’s iron gates to drop off food scraps. The garden’s composting operation, which started off small with a single sign and a couple of bins, now serves 275 people every Sunday and, in partnership with the nonprofit Big Reuse, has processed 1,500 pounds of organic waste each week.

There’s been no letup in how much waste New Yorkers are generating. And the weight of the trash in a garbage truck can tell us where people spend their time.

In April 2020, the first full month after the emergency was declared, the DSNY collected 8% less trash than in the prior year, despite the migration from the office to the home. In Community District 8, garbage collection was down 10% in April from the prior year.

By June, however, the neighborhood was at 110% of the previous year’s total, suggesting that many residents had returned after case counts had settled down.

Clean Up Crown Heights has been getting help with the increased load, doing joint cleanups with activist groups like Riders4Rights. This has led to some busy cleanup events recently.

Although online outreach and recruitment operation continues, the group’s best marketing tool might be word-of-mouth.

At one cleanup, a woman opened the window of her third-floor apartment and yelled down, “I want to help out!”